Dara: This past Monday was the American Total Solar Eclipse of 2017 and coincidentally our 2nd anniversary so we’ve been up in Portland and Salem, Oregon for the past few days to celebrate.

TJ: We spent 4 days in total in Oregon, arriving in Portland on Saturday at 2am and getting back to LA Wednesday morning. We’ll do another post about our Portland-specific adventures later but for now we want to tell you about our awesome eclipse adventures and how you can start planning for the United States’ next eclipse in 2024!

Dara: The first and most important thing is to plan ahead! We found out about the eclipse last October and immediately put in our AirBnB, car rental, and winery reservation then. What’s crazy is that even though the general public hadn’t even heard about the eclipse at that point, a lot of hotels were already fully booked! We re-checked available reservations again in July just for fun and found out that reservations were now going into the $1000s!

TJ: So in that respect we got lucky. Where we did wait too long though was plane tickets. We were expecting the prices to drop slightly in the way they normally do as a date approaches, but instead they skyrocketed.

So we unfortunately ended up spending $900 on plane tickets that we started tracking at $500 and whose price on a normal weekend would have only been $250. Lesson learned the hard way, but hey it was our anniversary so I was willing to splurge since everything else we got was a steal.

Yes, we were so lucky to have found an amazing winery, Arcane Cellars, to stay at for the eclipse. Otherwise, we would have been one of the people stuck just trying to watch from their cars or trying to find some sort of public event at the last minute.

The other great thing about our eclipse location is that we were one of the few places in the path of totality that didn’t have clouds! Of course it’s hard to predict the exact weather that’ll be around at a future eclipse location but you can always look at their past averages before you pick somewhere. You don’t want to spend a bunch of money on reservations just to end up unable to see the main event!

Where we stayed, at Arcane Cellars, is located in Willamette Valley – a beautiful valley in western Oregon full of wineries and majestic countryside scenery. It’s a very small, family-run winery, but they have a field that is always open for camping, and is located along the Willamette River, so kayakers will often pull up to the river bank and pit-stop at the winery.

For the eclipse, they had 100 or so camping spots open for tent camping and RV’s. We drove down from Portland to Salem to get to there ahead of welcome events that night, where we got cool event wristbands, had a catered dinner, and ended the night with some live music and dancing from a local cover band.

Before breakfast the next morning, I was luckily up early enough to take pictures of the beautiful scenery at dawn.

But I slept in and we hung out around our campsite in the morning, not realizing that getting to breakfast late meant no breakfast for us! 😦

It was fine though because we weren’t too hungry and being on the patio anyway was cool because we got to listen to a Oregon professor give a presentation on eclipses. We won’t go through that history and science in this blog, but if you’re interested, here are a couple articles to get you started on learning: here and this.

Luckily the science of eclipses is so exact these days that we could plan precisely when to head over to the field to watch it begin. Overall, total solar eclipses last around 2 hours, with totality lasting around 2 minutes so we brought out chairs to chill on along with our cameras and a tripod.

The most equipment important though was our eclipse glasses! Only the two minutes or less of totality can be viewed without eclipse glasses because the sun is being completely blocked out. But otherwise, looking into the sun directly (even if only a sliver) causes major eye damage so intensely UV filtered glasses are a must for eclipse watching. Make sure you grab certified ones though because fakes can ruin your eyesight!

The first hour of watching was mostly anticipation. Without the glasses, everything looks pretty normal, but with the glasses you can see the moon slowly taking bigger and bigger ‘bites’ out of the sun. This takes about an hour, so without intense focus it’s hard to see any movement.

TJ set up his camera with zoom lens and an intense ND filter (which acts like the camera’s eclipse glasses) to be able to take pictures of the eclipse as it happened. What’s cool/crazy about solar eclipses is that even as the sun is almost 50% blocked out, it’s so bright that the sky looks almost the same. So you can imagine how scared ancient peoples were when very suddenly (at about 75% covered) the sky got dark and then the sun was replaced by a crazy black ball of fire.

Towards the end of the hour, the anticipation builds and everyone focuses on the slimmer and slimmer line of the sun showing through the eclipse glasses. A weird shadow also starts to fall over the area, and the world feels a bit  darker than it should be as you head into totality.

After the last tiny sliver of the sun disappears in your eclipse glasses, you can take them off and gaze at Totality.

Totality really is one of the most spectacular things I have ever seen. Cameras don’t do it justice, and anything less than totality doesn’t quite have the same gut punch. For me, one of the most incredible aspects of Totality is not the sky, but in the lighting of the earth around you. The strangest, ethereal shadow passes over your surroundings, flattening the image around you in a strange, photographic dark haze.

It is jaw-dropping, awe-inspiring, and makes you feel as though you’ve entered another dimension of reality. No picture of a total solar eclipse can do the experience justice because cameras aren’t capable of capturing the same range of color and depth that the naked eye can. Pictures make it look like the sky just turns to night and always tend to be in black and white. But in reality, even the dark moon is tinted with the reflection of the earth in colors that are almost impossible to re-create. Even more spectacular is being able to see stars and planets just beyond the blue light of the sky. It truly makes you reflect on your place in the universe.

It’s really something that’s worth experiencing at least once in your lifetime if you can. The sheer scale of it and the otherworldly atmosphere can only be fully captured in person. 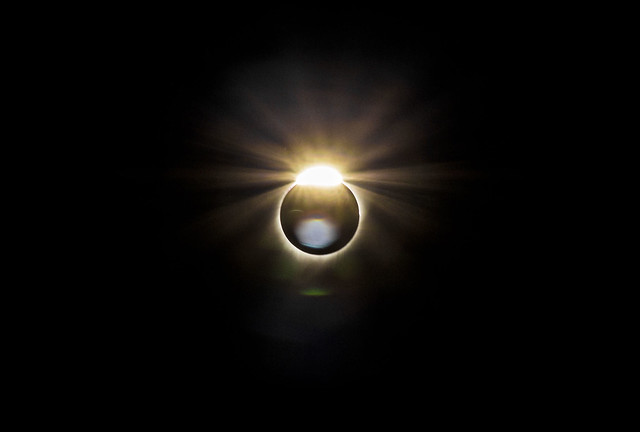 The hour or so after Totality is still interesting but basically just what you saw for the first hour in reverse. The moon moves out of the sun’s way, the sky gets brighter and brighter, and then the world moves on as if nothing ever happened.

Overall, it was one of the greatest experiences of my entire life and I can’t recommend it enough.

Seconded! I really hope you all can plan ahead for 2024 so you can experience it too.

*Though we spent nearly $2k for the past weekend, this was only 24 hours out of a larger trip that we went all out on for our anniversary.