TJ: After our adventures in Banff, we drove off to Calgary, 2 hours or so away, down from the mountains in the vast flat plains of Alberta.

Dara: In Calgary, we stayed with one of my great friends Pam who always calls Calgary “The Texas of Canada”

TJ: Which is a very accurate approximation… Also, fun fact: Not only had I never met Pam before but neither had Dara! They “met” years ago through Tumblr, bonding over Glee, Harry Potter and Darren Criss.

Dara: It’s always so weird for me to have to explain my internet friends because I have so many of them (and most of them I’ve gone on to hang out with in person) that it’s not strange to me. I’ve been texting/skyping/vlogging with these people for a minimum 7 years now so they’re definitely close friends!

So we knew it definitely wasn’t catfishing, and that Pam and her boyfriend Mitch are very real and very awesome.

We didn’t do too much that first night, since we had just gotten in, but we did go out to a fantastic huge BBQ dinner at Hayden Block Smoke & Whiskey in the cool and upcoming Kensington area of Calgary, just west of downtown. We stuffed our faces with brisket, pulled pork, corn bread, and hot links galore.

And I tried a couple whiskies! The place is very popular and we could see why. BBQ in Calgary is part of the culture and is very very good. (Again… Texas of Canada)

After that we kicked back, played a game of settlers, then slept late cause it had been a very long day of adventures.

The next morning after sleeping in, we headed with Pam (Mitch had work) to Spruce Meadows, which we found on TripAdvisor, and which, in the winter, holds an enormous Christmas Market. In the summer, it’s also a tourist destination, since they have a horse track where you can watch races.

It was enormous – something like 6 huge buildings filled with Christmas vendors.

The one thing we bought while there was some good old Canadian Maple Syrup. It was honestly so good. I didn’t know that there are different grades of color in maple syrup – we tried the dark maple syrup at a tent, which I loved. Bold and rich. We ended up buying the medium dark. You definitely try Canadian maple syrup if you go.

We also had fun hanging out with the reindeer they had! 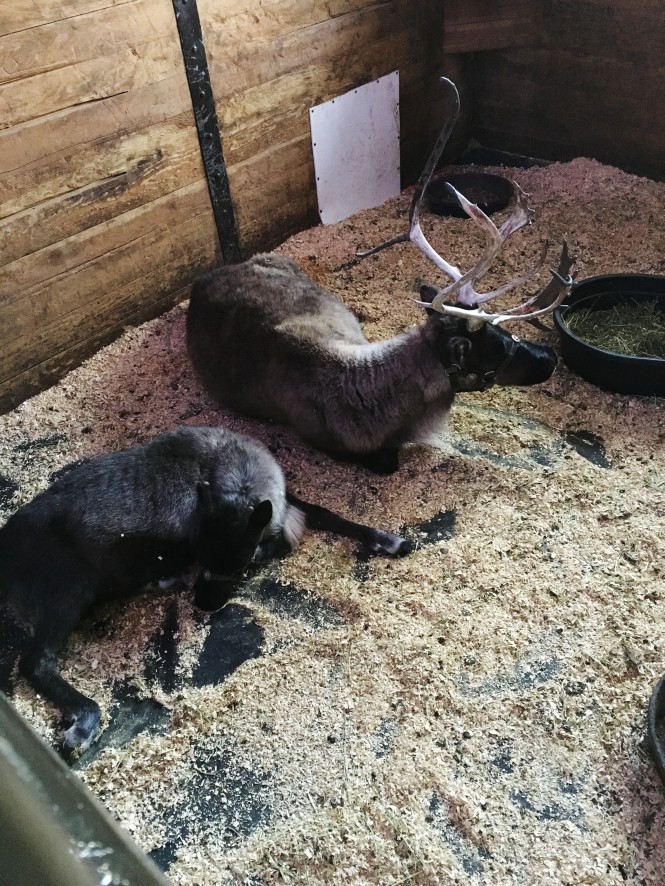 After that we headed to lunch at the famous Boogie’s Burgers, which has awesome, kooky decorations and great burgers. They’re known for their strange milkshakes and the “Don’t Fear the Reaper Burger” which has four patties, four slices of bacon, a hot link, cheddar, a fried egg and a mini corndog on it. We did not brave that one, but I did grab a maple syrup and bacon milkshake! It had chunks of bacon in it and it was delicious. I also tried their “saddle sauce” with our fries. It’s basically spicy BBQ, and is very good! Apparently it’s a normal thing to Calgarians?

Also they put Plum Sauce on Chicken Fingers which I had never even heard of before. It doesn’t even really taste like plums. I was very confused about its existence and Pam was shocked that it wasn’t something that’s common in the US.

After lunch we drove over to the beautiful, relatively new Millennium Bridge (aka Peace Bridge) near downtown, and strolled across, keeping our outdoor time to a minimum cause Calgary can get COLD.

Then we ventured to the Glenbow museum, a very large museum of art and history in the center of downtown. It’s a great place to learn about Alberta’s history – everything from theIndigenous Peoples of the area to the modern oil booms.

Canada has a more readily acknowledged, though still fraught, relationship with Indigenous Peoples than the US, and is much more dedicated to teaching about their history and culture.

The exhibits also had a bunch of in depth profiles of important Canadian figures that we’re fascinating. These history exhibits were all on one floor, we also went through a few other exhibits on other floors: Warriors of History, Art of the West, and more. 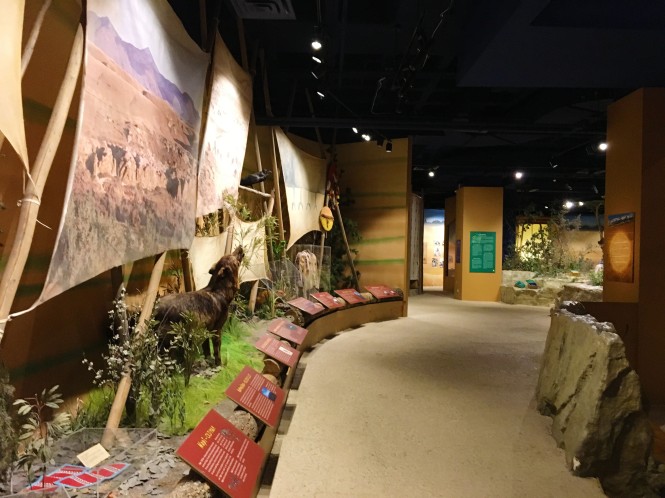 On our way home, we drove by the Calgary Tower, which is Calgary’s version of the CN Tower. It’s smaller, and a little expensive to go up, so we didn’t end up going in, but it is something fun to do if you’re there. We also drove by the Wonderland Sculpture, a huge public art work of a wireframe head.

After resting a bit at home, the three of us met Mitch at the Calgary Zoo, which has a fantastic christmas lights display on in the wintertime. It’s a great place to wander, take pictures, and get some hot chocolate. 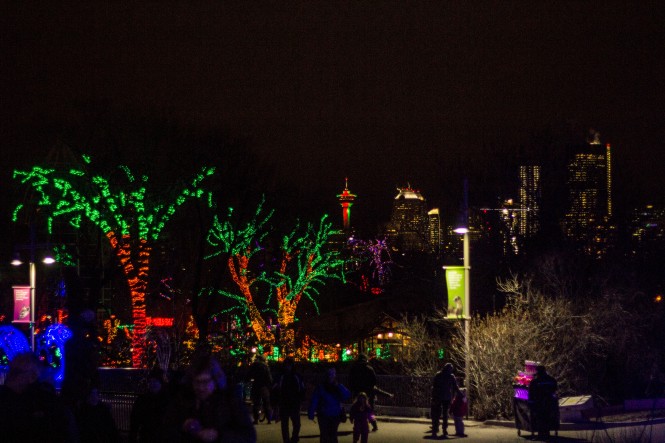 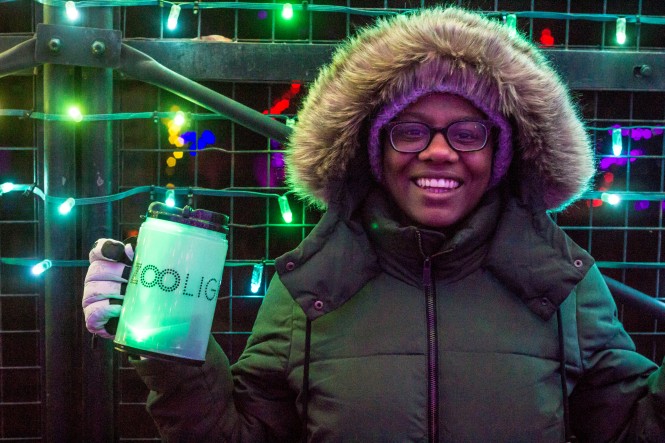 In a light-up mug like this one! Though the hot chocolate itself was a bit watery, I think the cup made up for it.

We got to see a few animals – snow leopards, birds – but mostly the event was about the christmas lights. We also got to take a photo with Santa, and wander through gardens decked out in giant Alice in Wonderland decorations. 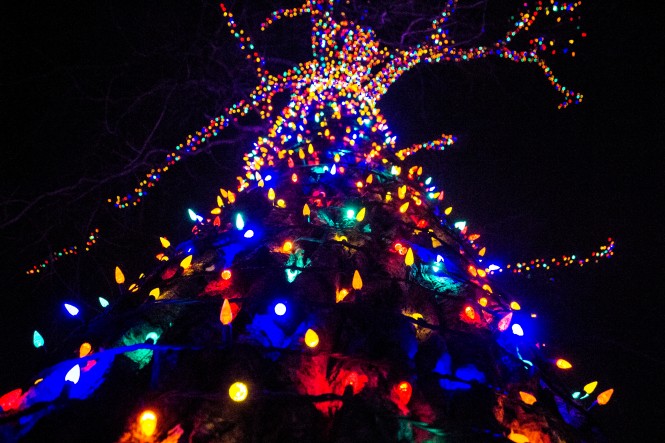 Afterwards, we were hungry and realized we never ate dinner, so we headed to Calgary’s Chinatown and grabbed some food at Bonga Korean Restaurant, one of Pam’s favorite places in the area.

And that was the end of our Calgary adventure! Well besides our insane airport trials and tribulations getting back which I don’t even want to torture you by recounting so here are our live tweets about it instead.

And bonus points for handing us these containers of unnamed Indian (we assume) food when we asked if we would be provided with meal vouchers pic.twitter.com/FKW4YaKYme

Word of the wise: tweeting angrily at companies does actually work and often times get you an expedited processing time.

But back to the trip: if you are planning on going to Calgary, try something uniquely Canadian! Like Ketchup Chips (they’re actually pretty good), Ice Wine, Maple Syrup, Saddle Sauce, or zany milkshakes!

And if you wanna get wasted and watch bullfights, go to Calgary during the annual Calgary Stampede in mid-July, which is basically an excuse to get hammered for 10 days straight.

We had a great time in Calgary thanks to Pam and Mitch! Last tip of the day – if you’re traveling somewhere, great friends can be some of the best guides in the world.

*We spent a lot of money eating out at expensive places, which can easily be cut down

**Half of this is skiing, while the other half is museums, ice climbing, sightseeing, etc.

One thought on “Alberta, Canada: Calgary”